For over a decade, the Fort Bend Junior Service League (FBJSL) has awarded college scholarships to deserving teen and women residents of Fort Bend County who desire to further their education. For 2019, FBJSL presented Elizabeth Lamb, Lauren Yang, Jazmine Perez, and Raney Harris each a Volunteer Scholarship in the amount of $1,000 each for their outstanding volunteer efforts. FBJSL also presented Brittany Taylor the New Beginnings Scholarship in the amount of $2,000 for her dedication and desire to further her education. The recipients were chosen from a highly qualified pool of applicants. The winners stood out among the other candidates as leaders in their schools and volunteer efforts.

Elizabeth Lamb is a senior at Travis High School. She is co-captain of the Varsity cheerleading team, and a 2-year member of the National Honor Society. She is a principal dancer at Ballet Forte where she has performed in Nutcracker for 9 years and was recently the lead in the production “Coppelia.” She has won various awards in numerous dance competitions in her 15 years of dancing. Elizabeth has accumulated over 550 volunteer hours through BalletFortes Community Outreach Projects, United Methodist Action Reachout Mission by Youth, and other local organizations. She has committed to Louisiana State University – Geaux Tigers! 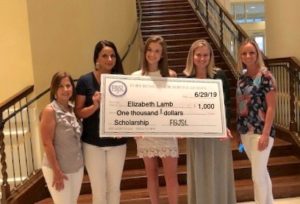 Lauren Yang is valedictorian at Dulles High School. She has served in leadership roles for numerous organizations, including the Congressional Youth Advisor Council, Advisory Board of 1000 Dreams Fund, FBISD Math and Science Academy Student Council, National English Honor Society, Mu Alpha Theta (National Math Honor Society), and National Art Honor Society. Lauren has received dozens of awards in academics, community service, art, piano, pageantry, and creative writing. She has accumulated over 1131 hours of volunteerism: 600 hours with Girl UP – United Nations Foundation Campaign, 223 hours with We Care Student Organization (which she co-founded), and 144 hours as the Volunteer Group Leader at Benavidez Elementary School Pen Pal and Mentor Program. Her volunteer experiences have motivated her to pursue a law degree at Harvard University. 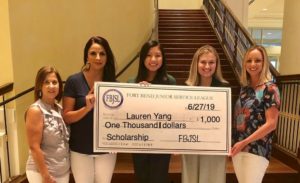 Jazmine Perez is a senior at Hightower High School. She is Captain of the Varsity soccer team, Director of the Youth Group at Soldiers of Christ, Vice President of the Medical Academy, a Fort Bend Academy Leadership Cadre, and a member of the Health Occupation Students of American and UNICEF. Her awards include 4 years of academic excellence, the Hildred Jones Drain Community Service Award, and she was placed in Future Business Leaders of America Competition in the Health Care Administration Event. Jazmine has volunteered over 420 hours at Mutts and Meows Rescue, Soldiers of Christ Youth Group, St. Vincent de Paul Food Pantry, and The Chosen Young Adult Group. 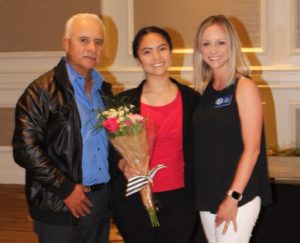 Brittany Taylor (not pictured) was awarded the New Beginnings Scholarship. After tragically losing their parents in high school, Brittany and her sisters had to separate and move in with different family members. Not only did she push through to finish two years of high school curriculum in a year through home school, but she did so with straight As. She always wanted to attend college but did not have the funds or marital support to do so. While working at a 911 dispatcher, she nevertheless enrolled in the EMT program at Wharton County Community College. When she and her ex-husband divorced in 2015, however, having no family in the area, she had to quit her job and drop out of school to care for her children. Brittany is still determined, though, and as of last Fall, thanks to a small grant and supportive family, was able to re-enroll in the EMT program. Last semester, she achieved a 4.0 GPA. She was recommended for this scholarship by both a Sergeant of the Sugar Land Police Department, as well as the Wharton County Junior College EMS Faculty and Lab Coordinator. Upon graduation from the program in August of 2019, she hopes to work as a life flight medic while pursuing a bachelor’s of nursing degree so that she may eventually become a flight nurse.