Fort Bend Junior Service League (FBJSL) established a scholarship program in 2008 for local teens and women who desire to further their education. FBJSL awards up to four Volunteer Scholarships in the amount of $1,000 each to female high school seniors who have demonstrated outstanding achievement in volunteerism and community service. 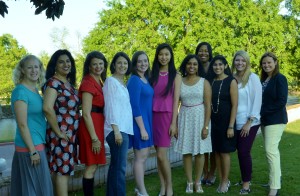 In 2016, FBJSL is pleased to present Courtney Kilfoy, Avanthika Mahendrababu, Kalpana Vaidya, and Karen Young, each a Volunteer Scholarship in the amount of $1,000 for their outstanding volunteer efforts in Fort Bend County. The recipients were chosen from a highly qualified pool of applicants from public, private and parochial schools throughout Fort Bend County. The winners stood out among the other candidates as leaders in their schools as well as in their various volunteer efforts.

Courtney is a senior at Ridge Point High School. She is very active in the community with over 500 volunteer hours. Courtney is a founding member of Hope for Three’s Teen Huddle. She is a leader at Ridge Point where she has served on the Spanish National Honor Society and as the team captain of the Club Soccer Team. Courtney plans to attend Saint Louis University and pursue a career in Occupational Therapy.

Avanthika is a senior at Clements High School where she has accumulated over 425 volunteer hours serving with many Fort Bend county nonprofits. She serves on the board of the Clements Spanish National Honor Society and DECA. Avanthika is a National AP Scholar and a National Merit Commended Scholar. She plans to attend Rice University and double major in bioengineering and computer science.

Kalpana is a senior at Stephen F. Austin High School. She has been extremely active as a volunteer in our community accumulating over 1150 hours of service. Kalpana is a National Merit Commended Scholar. Most impressively, she founded a program called “World Science Night” at Sartartia Middle School. The program is open to the community and designed to inspire and encourage kids to learn about and enjoy science. She was accepted into the Touring Scholars Program at the University of Texas and plans to major in computer science with hopes to apply virtual reality to education.

Karen is a senior at Dulles High School. She has volunteered over 680 hours in the community. She is the CEO and co-founder of an app called Squad Fitness Goals. She is very active in leadership at Dulles serving on the Math and Art National Honor Societies and co-founding the math and science tutoring program. Karen is currently deciding between Harvard and Stanford and plans to double major in economics and computer science.

The Fort Bend Junior Service League is a 501(c)(3) non-profit organization of women committed to promoting volunteerism, to developing the potential of women and to improving the Fort Bend County community through the effective action and leadership of trained volunteers.